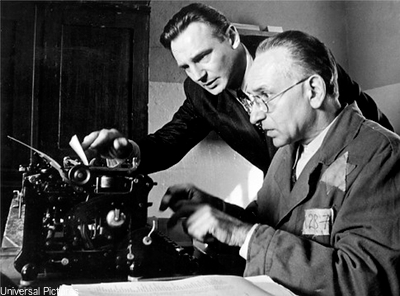 “What’s your favorite movie” is a pretty innocuous question. Most people have one and they love to tell you why they love it. When I’m asked this question, I probably appear as if I was just asked which limb I’d like to keep. I just don’t know what to say. I can’t choose. It changes with my mood, or what I’ve seen recently, or the weather, or what time of day it is, or whatever celestial alignment is present at the moment…

But maybe a year ago someone asked me this question and for once I didn’t make some unintelligible, annoyed grumbling sound. I simply said Schindler’s List. I had been watching it a lot at the time and it was very much on my mind. At the time it indeed was one of my favorite movies, probably in my top five. It’s the crowning achievement of maybe the greatest filmmaker who ever lived. Certainly we can all agree it’s a great film, so just for the sake of simplicity I’ve taken to singing it’s praises when asked what my favorite movie is. The thing is, when you tell people your favorite movie is Schindler’s List, most of the time you get a thoughtful, “oh” and an attempt to change the subject. You almost never get a reciprocated enthusiasm of any kind. People don’t really want to talk about it. Sometimes, they even get the impression that I’m being a smartass, like I’m trying to push buttons or something. This reaction is due to the fact that they likely haven’t seen it in some time and very likely, they remember it as being really, really, depressing. Therefore they aren’t jumping at the chance to revisit it.

I guess I just see it very differently. Yet I think I’m very much seeing the film Spielberg intended. If all he wanted to do was hit audiences over the head with the Holocaust for three and a half hours, there would really be no point. That’s not what he did. This movie is every bit as much about the good found in humanity, even in the absolute worst situations, as it is a remembrance of the Holocaust. While it does serve as a memorial to those who were murdered, it’s also a celebration of life. It’s a celebration of surviving one of the most horrible moments in history. I’m not trying to be provocative when I say it’s my favorite movie. Nor am I trying to be provocative when I claim that I feel great after watching this movie, or that I enjoy it immensely and find it extremely uplifting when all is said and done. I’m also not denying that it contains some of the grisliest and at times, jaw droppingly upsetting moments that have been committed to film. I just feel that that’s where it‘s power comes from. It doesn’t flinch when it has to show you exactly what these people faced and that makes the fact that people managed to band together and live through this, so much more amazing and cathartic.

As much as this movie is a depiction of the depraved cruelty of the Nazi regime, it’s also about the makeshift family units the Schindler Jews formed. It’s about the way they look after each other and insure one another’s survival through all the struggles, humiliations and the constant threat of death. It’s about the ways that they manage to find fleeting moments of levity in the face of all of this.

At the heart of it, the film is also about two of the unlikeliest people, Oskar Schindler and Itzhak Stern, slowly coming to understand each other and ultimately becoming great and valued friends. And overall, if you had to sum up the film in one sentence, wouldn’t you agree it’s really about how much good one person can accomplish even in the face of the most horrible of circumstances imaginable?

It’s understandable if you haven’t seen this film in years, that it’s the horrors that stick out on your mind. They’re vivid and powerful images. You likely remember the little girl in the red coat, that striking instance of color in the black and white. And you remember that gut punch you felt when her badly decomposed body is later casually carted past us during the immolation scene. But there was another scene containing color and I’d argue that it’s even more powerful. Later on, after Schindler has paid for everyone and they’re safely working in his factory, he chastises Rabbi Lewartow for not observing the Sabbath. Lewartow reacts with complete shock that someone would even suggest he could. And so he holds Shabbat, probably for the first time in years, and as he lights the candle its flame burns a beautiful orange/yellow. It’s here that you realize, almost with a great exhale, that the horrors may be behind us. The color of the flame is hope returning. Things are really going to be all right.

The more I watch this movie (and I’ve seen it quite a few times at this point) it’s these moments, the human moments, which stand out in my mind. It’s moments like Schindler and Stern finally sharing that drink and realizing just how far they’ve come together. Or a group of people, having just been forcibly removed from their homes and subjugated to the ghetto, huddling around a trashcan fire, having a conversation and putting their troubles aside for a time. It’s that look of kindness and gratitude on the terminally ill woman’s face for the doctor about to euthanize her and save her from a bloody execution. It’s the glee in Schindler’s eyes as he hoses down the train cars, giving some relief to the people baking inside, while several of the Nazi regime’s “finest” watch, helpless to stop him. Or that whip-smart kid stopping a Nazi shooing spree of several suspects by accusing the man they just shot of being the chicken thief…

Then there’s the scene that ends the film. When the film was released, I heard critical comments about the grave scene. Some thought it was gratuitous. I couldn’t disagree more. To me, that’s the movie. When you see the actual Schindlerjuden along side the actors who portrayed them, it becomes clear how awesome, in the traditional usage of the word, Schindler’s actions were. These are real people and they’re here today because of him. After all we’ve just witnessed, to see the actual people who survived is profound in a way that can’t be put into words. It’s what the visual medium of film was made for. And the thing that always strikes me and moves me to tears of joy is how full of life they all seem. After all they’ve been through, it’s not bitterness or anger on their faces, it’s joy and contentedness. And really, after living through what they lived through, what could life throw at them that would even come close in severity? I’m positive there were nightmares and times of being haunted by what they witnessed. But judging from their faces, what they took away from the ordeal was an appreciation of life that few of us can understand.

I’m not alone in believing this film to be inspiring. It’s ranked number three on the AFI’s 100 most inspiring movies, just behind To Kill a Mockingbird (2) and It’s a Wonderful Life (1). Aside from that, Liam Neeson has arguably never been better. Ralph Fiennes creates one of the most chillingly real psychopaths in recent memory, so accurate that an actual Schindler Jew who was advising on set, actually began to shake when she saw him in character. Then you have Ben Kingsley, reminding us just how easy he makes it seem and how underrated he really is. He never appears to be acting here. He just inhabits the character.

Is it really my favorite movie? Most of the time, yes. And if by telling you it is, I can get you to watch it again with clearer eyes, I’ll gladly say it is. It’s a remarkable film.