A few months ago I watched LA Confidential again. I love LA Confidential. The film is kind of a miracle– a dense, twisty, multi-faceted crime story that manages to put four fully fleshed out main characters front and center, giving them all moments to shine, and having it work all beautifully. Then it also gives us a multitude of well drawn supporting characters, an engaging romance, exciting action, and a plot that takes us all over 1950’s Los Angeles. It never feels rushed, lacking or confusing in any way and it manages to do all this in 138 minutes. “It’s one of the best movies of the 90’s”, I thought to myself. “Definitely in my top five.”

Then I decided I’d put my money where my mouth was and do a list of the top five films of the 90’s, showing everyone what an astute film enthusiast I was by giving LA Confidential a spot (and admittedly praising an already highly praised film). And then I actually started compiling the list and realized why people seldom do top five lists for things spanning a decade. Because it turns out, there’s a metric crap ton of incredible movies that came out in the 90’s and trying to pick only five is ridiculous. Picking ten would’ve been far less painful but it’s not what I said I’d do. I set out to do a list of five and wanted to embrace the challenge… And then not even put LA Confidential on it. 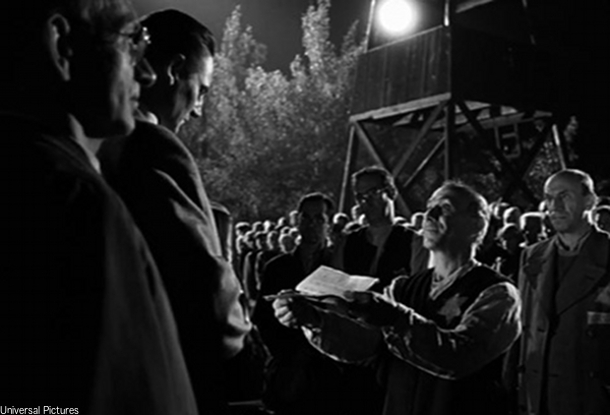 I agonized over putting this one on here. It meant I had to leave off Boogie Nights, the film that marked the arrival of one of the most vital filmmakers working today in Paul Thomas Anderson. It also meant no Rushmore, which did the same for Wes Anderson. But in the end I think it’s the correct choice. I’ve already kind of covered my reverence for this film. It’s a landmark. One of the most important films ever made. It also marked an important leap in sophistication and maturity for the most commercially successful filmmaker of all time. Spielberg showed he is indeed a great ARTIST with this one, worthy of the same greatness heaped on his more revered colleagues in that great 70’s auteur renaissance that also spawned Scorsese, Coppola, De Palma, Lucas, Altman, Lumet,…Cimino. So it’s a very important film and a very important moment in the career of a very important filmmaker. It’s also my favorite film. 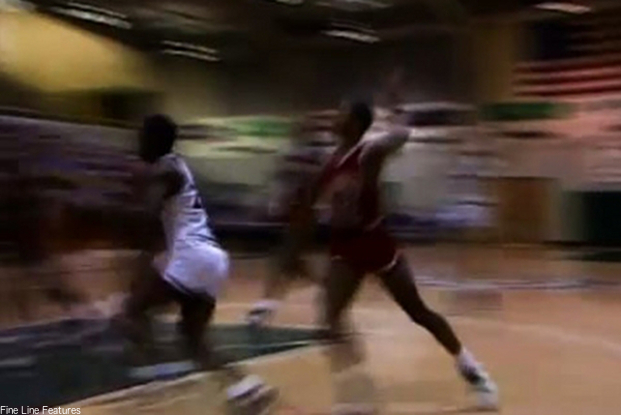 I’m putting a documentary on here instead of Unforgiven– the best film of Clint Eastwood’s career and one of the best Westerns ever. It also means no room for The Shawshank Redemption and that’s one of the most beloved films of all time. Why? Because I never paid attention to documentaries before this one came out (and The Academy famously didn’t pay attention to it after it came out). And one really should pay attention to documentaries, because when they’re done right, it’s a transcending experience. I don’t think you’ll find a more honest and thorough record of what inner city black youth were up against in the 90’s. But it’s more than its journalistic value, it’s also a bloody entertaining film. You can’t script this kind of thing. The subjects’ lives take turns you’d call bullshit on if they happened in a narrative film. Small things turn out to be important and meaningful victories. Situations that seem predictable on the surface turn out to not be so clear-cut. It’s a documentary about two inner city kids chasing dreams of playing professional basketball. Yet you could just as easily say it’s about life in general with complete sincerity, that’s the scope we’re dealing with here. 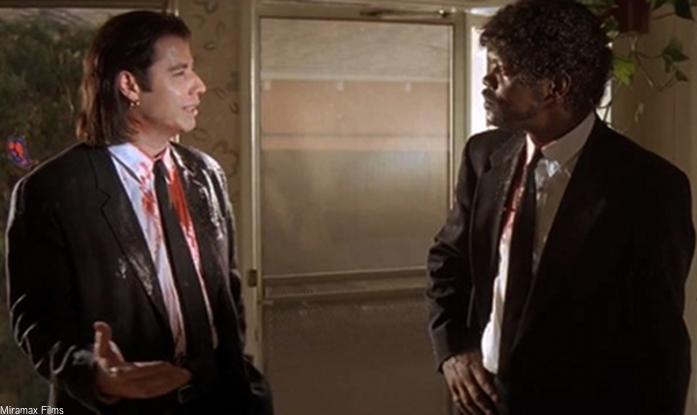 I go back and forth on which of these is number 3 and number 2. It mostly has to do with where my enthusiasm/tolerance balance sits at any given time for Tarantino’s whole “thing”. That “thing” being his tendency to risk pulling you of the narrative from time to time to let you know that he’s Quentin Tarantino and he made this movie you’re watching. I used to think it was brilliantly original and when we get right down to it, the man is brilliant when it comes to directing the everlasting fuck out of a scene. I just, you know, find it off putting to have a whole elaborate “putting on make-up” scene, set to a David Bowie song, right before the climax of what is otherwise an exhaustively period specific WWII movie. But it’s almost as if he can’t help it. He just has to let you know: “You can’t physically see me, but I’m Quentin Tarantino and this is my film.” But I digress. We’re dealing with the 90’s and fewer films had the impact that Pulp Fiction had. It WAS brilliantly original and it was very exciting to see such a thing. It was someone who didn’t play by traditional narrative rules, but could still make a helluva an entertaining movie. Some aspects have not aged well and remain definitively of it’s decade (which was the 70’s via the 90’s) Also, the amount of wannabes this film unleashed on the world, filmmakers who wrongly interpreted that lots of swears + pop culture + lots of violence = everything that made Pulp Fiction great (or most of the people I was in film school with– myself included) was very unfortunate. But that’s a part of its legacy best forgotten. There was and is only one Tarantino and only one Pulp Fiction. 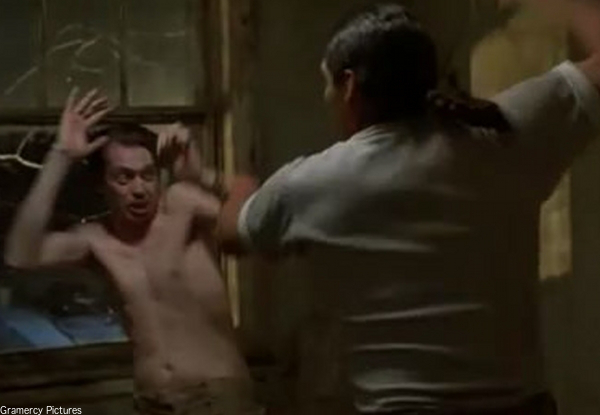 Then we have Fargo. When we get right down to it, if I’m given the choice between watching Pulp Fiction and watching Fargo, Fargo usually wins. Where Pulp Fiction is in your face, Fargo is elegant, it’s jet black humor so delicately balanced it’s a miracle it turned out as well as it did. And when I say well, I mean perfect. There’s not a thing that could be improved upon here. I used to quote Pulp Fiction all the time. Now I quote Fargo all the time. This was the statement that made damn sure we all knew who the Coen Brothers were and that they were a force to be reckoned with. They had great films before this, but there was something so singular and perfect about this one that, even if every once in a while they make something ponderous like The Man Who Wasn’t There, people are willing to go along with it. Because we now have such a thing as A Coen Brothers Movie. There are many different types of Coen Brothers Movie, but they’re all distinctly Coen Brothers. And they do it without ever pulling you out of the narrative to let you know who they are. They just kind of masterfully tell their story. So one of these is number 3 and the other is number 2. I’ll let you decide. 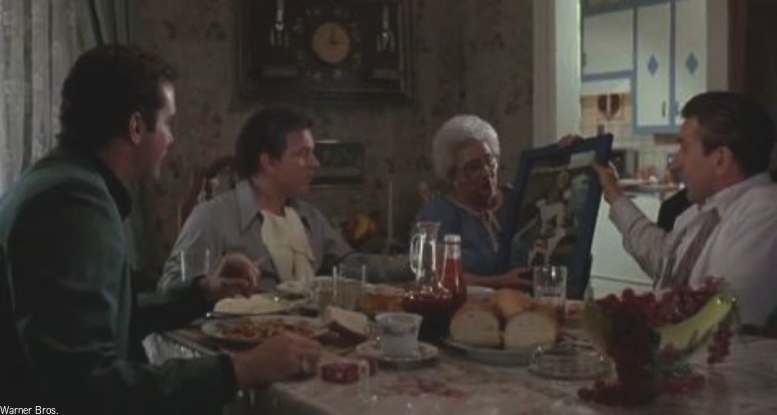 This was the only easy choice on here. It’s an absolute no brainer. Just as he arguably made the best film of the 80’s with Raging Bull in the first year of that decade, so too did he with Goodfellas in the 90’s. There really is no other 90’s film that achieves its level of craftsmanship, impact and sheer entertainment value. It’s one of the best films of the past century and films only became a commercial enterprise in the past century. If (if, because it’s yet to happen) someone tells me they don’t like Goodfellas I have to assume they’re lying. This film came on in the break room at a former place of work and one of my younger co-workers asked what it was. I told him it was Goodfellas and he should go home and watch it sometime that weekend and that he’ll love it so much he’ll come in on Monday and thank me. He did indeed watch it that weekend, loved it, and thanked me on Monday. Martin Scorsese got the idea to direct an entire movie like a trailer, where you’re given all the exciting stuff in as exciting a fashion as possible. That’s Goodfellas. And after a good but not great 80’s output from Scorsese, this was about as definitive a comeback as you could make, dropping what might be your best film in one of the strongest filmographies imaginable. There really isn’t any praise I can heap upon this that hasn’t already been heaped on it. The performances, the period detail, cinematography, sound design, editing, that soundtrack that is now forever linked with the images (like the end of Layla, which will always bring to mind images of dead bodies being found all over the city), everything is executed as well as it could possibly be. Without the existence of Goodfellas, there are a lot of other great movies that wouldn’t exist. Including Pulp Fiction.