(Warning, some of these links have pictures. If you’re like me and pictures of spiders upset you, be warned. Or squint really hard so your eyes are almost shut like I do.)

I don’t like them but I damn well respect them. I understand their usefulness and their importance in the circle of life and all that. It’s possible I’m saying all of that mainly to assuage the ire of any spiders that happen to be reading this, but it’s also because I have to admit they are remarkable creatures. They just happen to be terrifying in appearance.

I can deal if need be. Living out in the western part of the country, I kind of have to get myself alright with them because they are a reality. In some places I’ve lived, they were in my bed on occasion. I could collapse into a catatonic ball every time one surfaced or I could just usher it on its way and move on with my life. I developed an understanding with them. But I still don’t like them and I will avoid having to deal with them if I can.

What is it about spiders that cause weird little convulsions of horror in the back of my head? In most cases they ARE genuinely more afraid of me then I am of them and they’ll even try to hide (and this is part of why they freak me out but I’ll get to that).

A lot of research says it’s a learned fear. That would make sense. My Mom freaks out at spiders and I probably saw it at an impressionable age. In reality very few are dangerous. There’s about 12 species out of tens of thousands of known species of spider that are harmful to humans. That’s like 0.1%.

But I did say “known species”. Scientists believe there are tens of thousands more species that have yet to be discovered. Likely they’re hanging out in the rainforest. So it’s possible that Shelob or the (completely bullshit, thank Christ) version of the camel spider, that chases after you while screaming, then paralyzes you so it can eat you while you’re still conscious, COULD in fact be a reality. Somewhere. I guess if you don’t understand the rainforest, stay the fuck out of the rainforest.

Then there’s this study, which seems to suggest that, while we may have to learn to fear them, our brains are hardwired to notice snakes and spiders.

So why do we notice them so readily? Maybe because they look so alien? I’m completely alright with snakes. I like them even. They’re neat. But they’re pretty much the only land dwelling animal with no arms or legs. But they still get around. There’s something inherently wrong about that, isn’t there? But that’s strictly talking from our human point of view that we’re the center of everything and everything should be like us.

So let’s look at spiders in this context. Spiders are just fucked up looking. Six legs I can deal with. I can even deal with hundreds of legs (but I know people who are just not right with centipedes). Eight legs is a deal breaker for some reason. There’s evidence that we are hardwired to fear certain characteristics in spiders such as their angular legs and unpredictability. Unpredictability could apply to snakes as well, no? But how about a spider’s face? For me, this is where all rational thought goes out the window. Snakes have two eyes and a mouth. So do dogs and cats and every other animal we love, including us. Six legged insects have two eyes. We understand two eyes. “Two eyes” is comfortable. “Eight eyes” is not. And why did we jump all the way to eight? How many three eyed or four or five eyed creatures can you think of off the top of your head? I have no study to cite, but I’m sure we’re hardwired to fear anything with a face full of eight lifeless black orbs. Lets not even mention the fact that they don’t have a head. Just an array of eight eyes and mandibles stuck in the front of a body.

Which brings me to a realization that we haven’t had a really memorable alien creature design in a movie since probably the Predator. Have you seen the face of a crab spider? I saw it once, for about as long as it took my eye lids to slam shut and my head to whip in the other direction, preventing myself from a life of wishing I could unsee it. But Hollywood Creature Creators? You have a whole host of Mother Nature’s finest abominations to choose from. Just look at spider faces.

The last thing that always makes me weary of spiders relates to that thing I mentioned earlier about their tendency to hide. Hiding from something much larger than you demonstrates intelligence. You watch many other insects, they just kind of bumble along, not really varying their speed or movement. Spiders will very quickly and unpredictably hide from you and wait you out. They can be VERY fast when they need to. They have very calculated, dare I say, thoughtful movements. I get the feeling that they’re trying to figure me out. And I don’t like anything that looks like terror itself trying to figure me out.

Interestingly enough, when I first wrote this piece back at the beginning of the decade, I had a whole bunch of examples of news articles about arachniphobia that happened to have pictures of the biggest, ugliest, hairiest spiders they could find right smack at the top of said articles. At the time Youtube was even doing a whole celebrate-the-release-of-The-Amazing-Spider-Man-in-theaters by festooning their homepage with a litany of spider related videos with very spidery images everywhere and very little actual Spider-Man content. But since then, the world has become more sensitive to arachnophobes. There’s even this amusing and rather long argument amongst the Wikipedia editors about whether it’s appropriate to have a picture of a big, ugly spider on their Arachophobia page.

There’s somthing to be said for being exposed to and therefore forced to confront your fears but I think it should be on your terms and this change of heart across the web is a nice gesture towards empathy. And in that spirit, here’s a heartwarming picture of kittens in a cup. 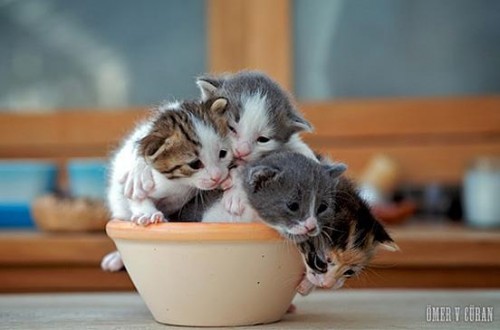